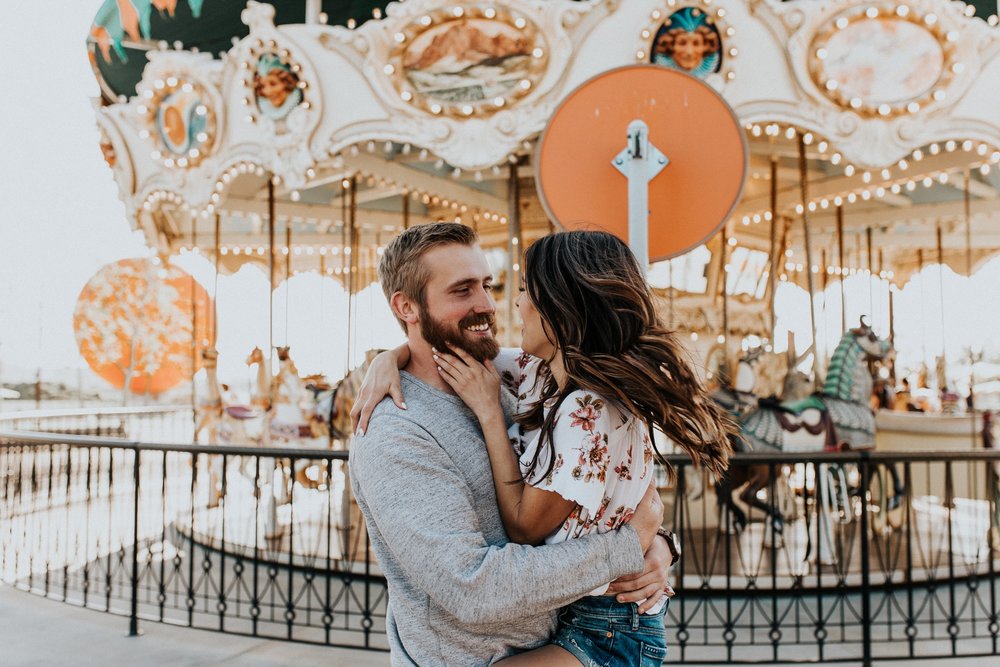 Ah, my favorite love story! Where do I begin?!

Well, before I start, let me give you a little background on this post.  I have been meaning to write this post for awhile but I wanted to wait until the timing was right.  A LOT has been going on in my personal life and I’ve honestly just been super busy…and super tired! I figured now the timing was right since Tim and I are on our way out for our first “out of state” trip as a couple.  You’ll be seeing a ton of stories (sorry in advance!) of us so now I thought was a good time to share.  I did a blog post awhile back which you can find here, on our first couples shoot together (can you tell I’m all about firsts?!) and said I would eventually share more on here. I also did a poll in the beginning of the year asking what you wanted to see more of and so many of you voted you wanted to see more personal stuff. Mostly about Tim, our relationship, date night ideas, and also lifestyle.  So, here goes nothing… 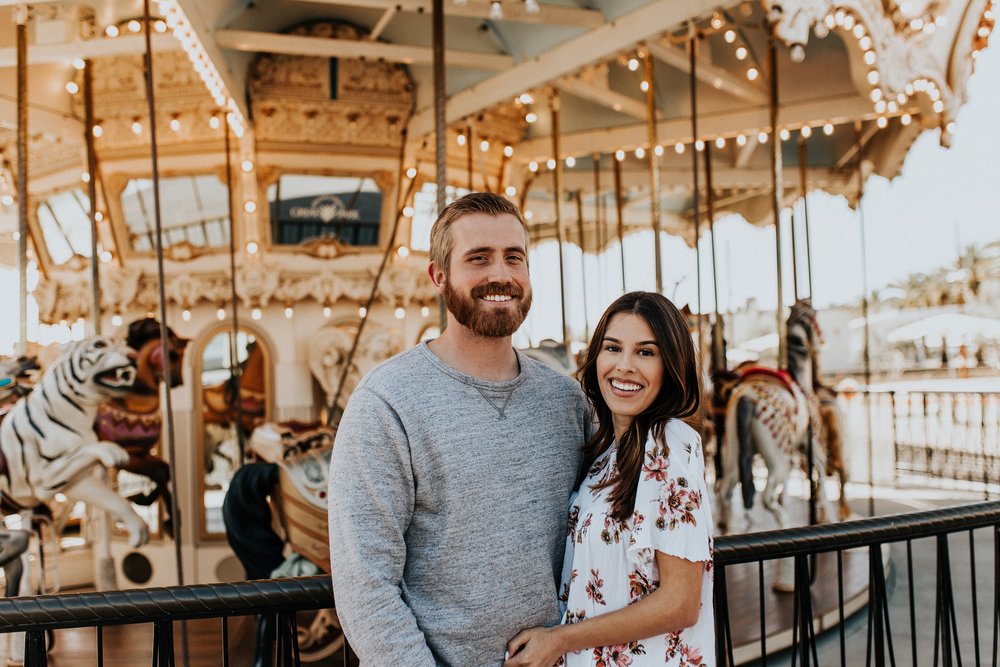 In May of 2017 I decided the time was right for me to start dating.  I had just gotten out of a terrible relationship two months prior, and even though it was pretty close timing to start dating again, I felt I was ready.  I honestly felt that I hadn’t had a relationship in months, because during my previous one I felt alone.  A few of my close girlfriends questioned me on this decision of putting myself back out there. They all expressed to me that they thought it was too soon, and maybe I should just take a break and work on myself. I didn’t disagree with them, and I understood their concern, but I also didn’t fully agree.  I had checked out of my previous relationship pretty much three months before it even ended.  And in those two months in between of me being single, I did do a lot of work on myself.  I wasn’t torn up about it at all, so from the moment I left, I started making changes.  The changes were all over the horizon, but they were mostly lifestyle.  I focused on my school work and actually started enjoying my second to last semester of college, I began going to Orange Theory and attempted to get fit again (ha!), eating healthier, spending time with friends, and much more that I won’t go into detail on because that could easily be another blog post, lol! I began feeling like me again and that was honestly one of the best feelings ever.  I definitely lost sight of who I was during that time so to gain it all back felt real good.

Then, once I decided what was right for me, I decided to go back into the dating scene…until shortly realizing that I wasn’t near any dating scene and any guys that I was around were not my type and did not strike my interest…at ALL. You see, I’m not like most 20 years old you probably know, which I’m very aware of.  Most people my age are enjoying college, not working, spending time with friends and adventuring during these years of their life.  And that to me is exactly how they should be spent.  Personally though, I have no interest in the college scene and have been ready to be an adult for what feels like years.  I was beyond sick and tired of dating boys.  Boys who were in college, not really sure what they were doing with their life, having no drive and no interest in planning a future out.  So, what did I do?! 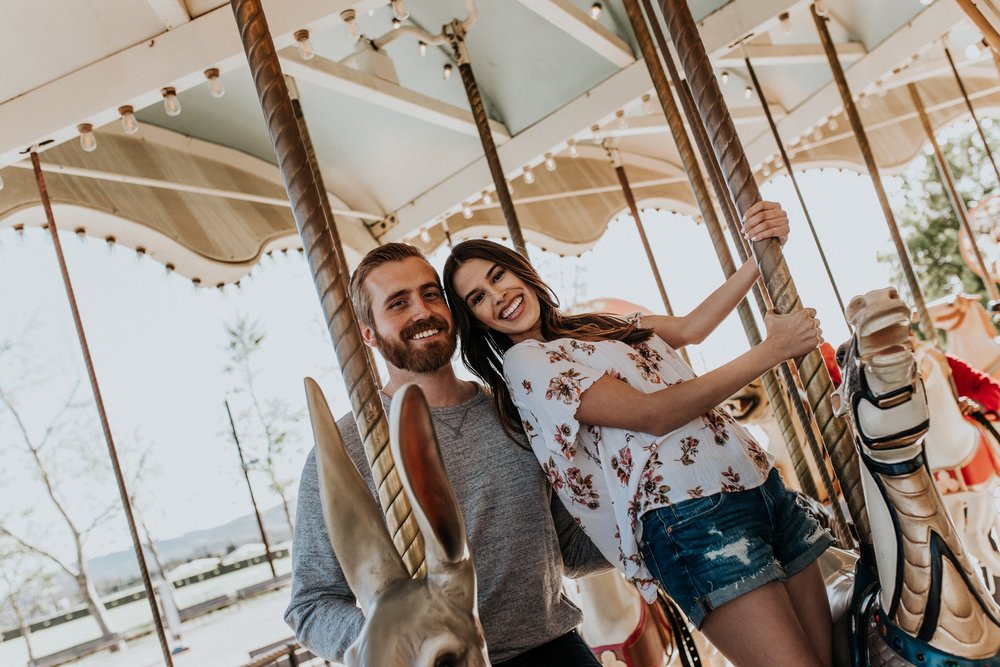 I downloaded Bumble, of course! The PERFECT way to meet someone who has their crap together and is ready to settle down…LOL. But in all seriousness, I felt that this was going to be my only way to meet someone who was possibly a little older and more mature.  I didn’t go to a university, so I was stuck with meeting people my age.  Not to mention I was at junior college, so that limited my options even more.  I’m a nanny, so the only guys I was around were married men or three year old little boys, obviously both out of the question!

Once I had had the app for about two weeks, I was ready to give up.  I had swiped left on more people than I could count, and it started showing up that there was no one in my area.  I think I actually swiped left on everyone– not kidding! And also, not going to lie here.  I did download Tinder and that definitely wasn’t going anywhere.  It was Friday morning and I told myself if I couldn’t match with someone on Bumble, and let alone get them to even reply, by Sunday, that I was going to delete the app and try again in a month or so.  I was ready to call it quits and just accept the fact that maybe my girlfriends were right, I should just be single and work on myself.  Side note for those who don’t know how Bumble works: Only girls can message first.

It was nap time and the little girl I was watching slept on my chest.  I had a show going on in the background, and I slowly was swiping left on every. single. person. Right before I closed out to check Instagram…Tim popped up. His college senior picture (SO HANDSOME!!!) front and center and his bio saying “Tall. Christian. Educated. Employed. Equal part active equal part couch potato” …I literally laughed out loud when I read this. Someone taking this app seriously, what? And that bio.  Talk about making a statement! But hey, I can’t judge.  Mine was super basic! “Follower of Christ, lover of life.  Nanny.” Simple, but it screamed basic white girl without a doubt! But after that being my first thought, my second thought was, I think I know him.

Pause the story! Another background blurb.  Growing up, I danced for 15 years going to the same dance studio my entire life.  We had teacher assistants in almost every class and one of my favorite TA’s was Becca! She was so sweet, caring, and not to mention an amazing dancer.  She was someone that all the little girls looked up to and still do.  After I eventually grew up, I became a TA and Becca became the dance teacher.  We taught a tiny tots class together for a year and I loved it! But other than teaching, we are seven years apart so we didn’t have the same friend groups or hangout because of the age difference. But low and behold, Becca had a younger brother…named Tim.

Ok, resume play! I quickly went to Instagram and Facebook to stalk Becca and make sure that this was her brother.  I looked him up, and actually couldn’t believe it.  My mind was going a mile minute and I had no idea what to do.  I just left him on the screen until finally I just literally said, “Screw it.  He’s probably going to swipe left on me anyways.” Well, what do you know? Instant match. Shit! Lol! 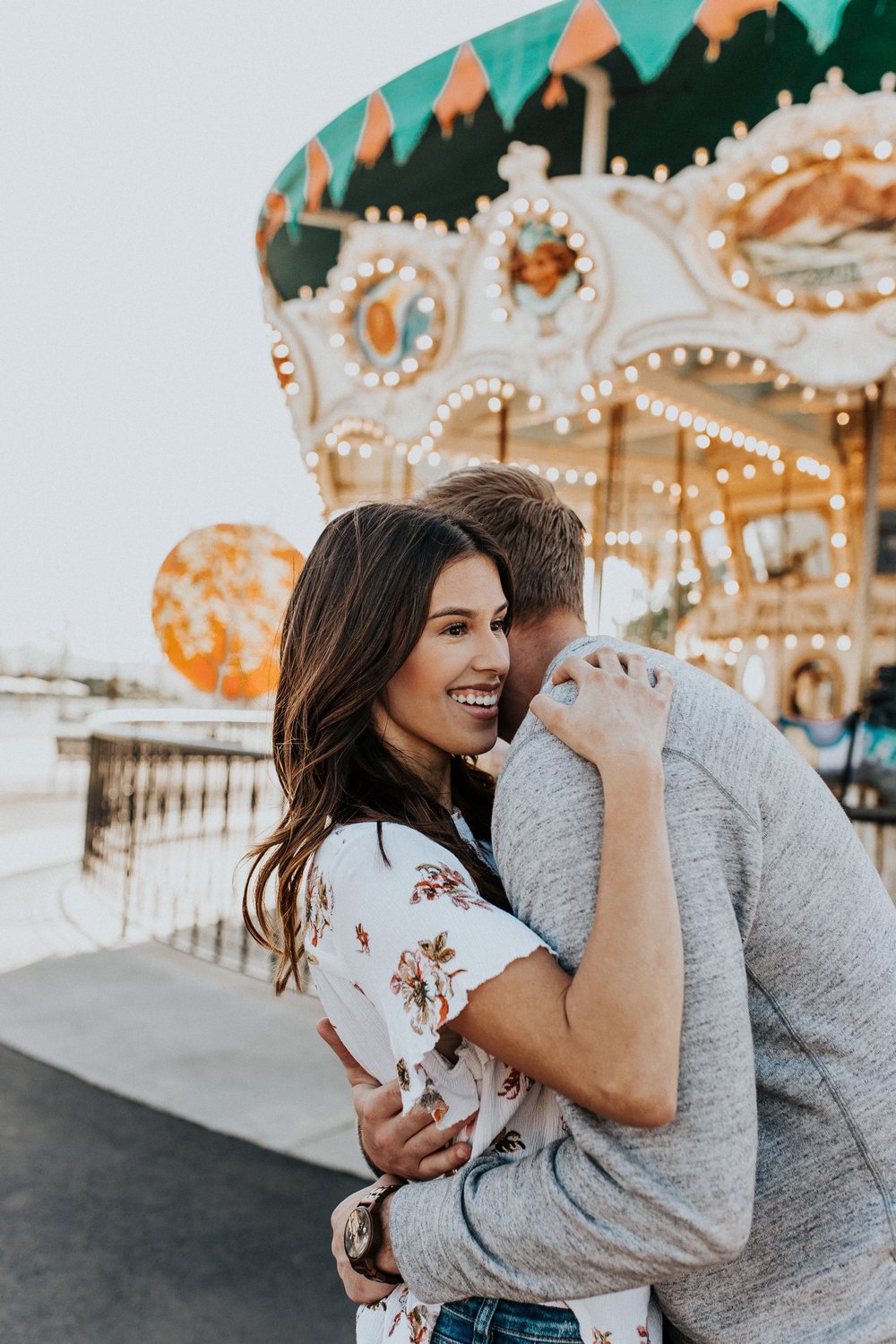 Pardon my language, but the reason I sorta freaked out was because I didn’t know how to feel.  Looking way far ahead at the time, I was like is this going to be a problem? Is she going to be mad? Is this going to be weird? Is he going to think its weird? Ah!!! While silently freaking out I sent him a message and of course, instant reply. More freaking out.  I decided to play it cool, and eventually the conversation came to talking about dance and I acted like I had no idea who his sister was.  I played clueless Danielle, and well it worked.  He didn’t seem to care one bit so a huge sigh of relief swept over me.  Fast forward and by Saturday or Sunday (can’t remember), we had moved over to texting and our first date was planned!

To keep you held over until I share the next segment, I decided to share a screenshot of our first words ever exchanged on Bumble. There I go with the “firsts” thing again! I just can’t help it! But really, I get butterflies just reading these over again because I remember exactly how nervous/excited/anxious I was! But for people who weren’t me, hopefully you’ll get some giggles out of these because I think everyone else will probably cringe, ha! Little did I know this conversation was the beginning or something pretty great 🙂 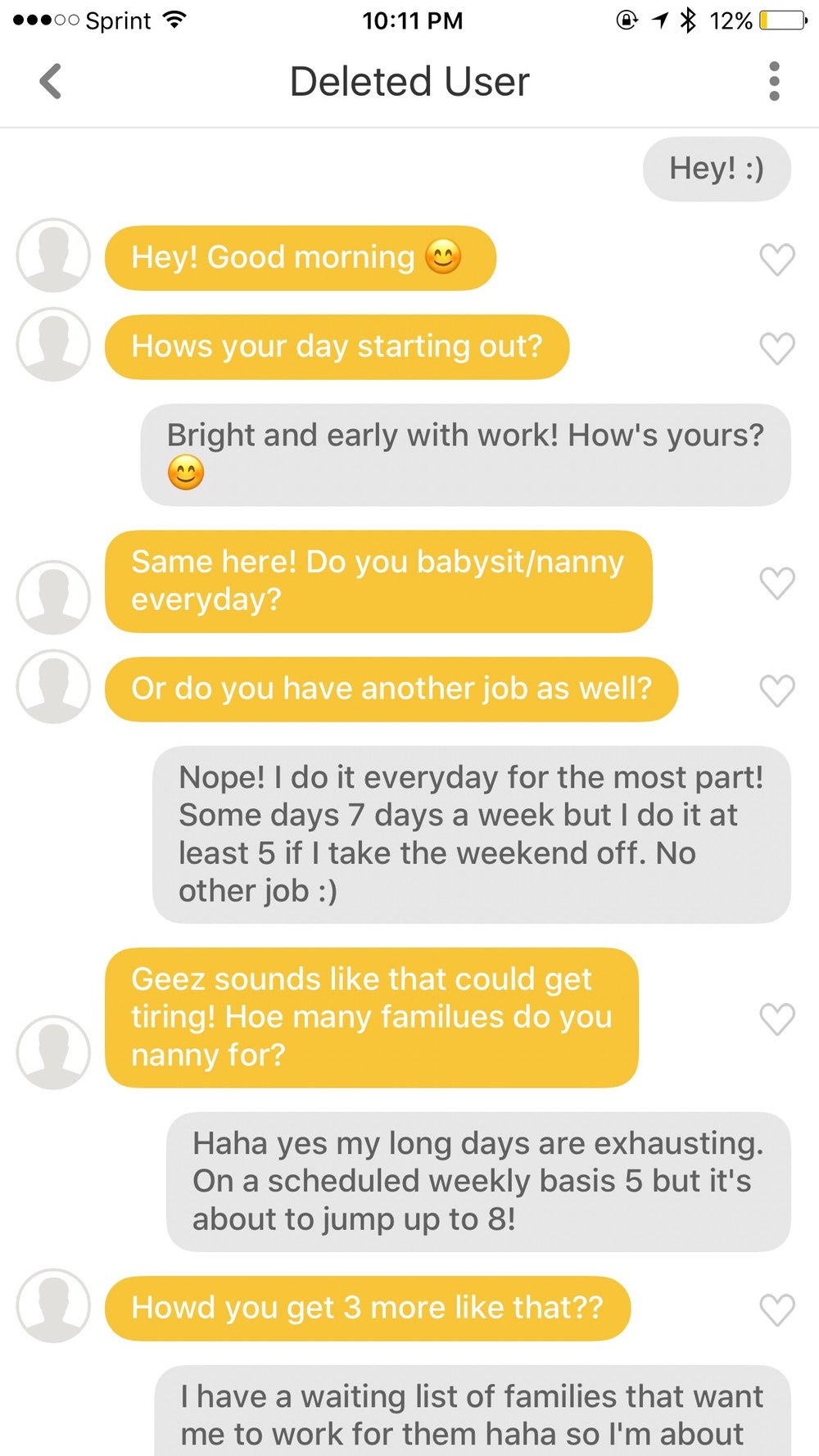 ***And in case you were wondering, Tim deleted his entire profile/deactivated his account right after he got my number, but I just deleted the app… oops! I’m happy I didn’t though, because I would have not been able to get these conversations back to save! I did this about 1 month after we were official.

Whoa, that was a long one! High five if you made it this far. AndI hope you enjoyed reading and getting to know little details and insights on how we met, and a little more about us.  I wasn’t planning on sharing the before of when we started dating, but the more details the better, right? I feel like it gets you guys to know me a little more personally than just behind the screen. The next blog post I’m planning on doing in this series is about our first date! And don’t worry, there are plenty of details on that as well! Thanks for stopping by. 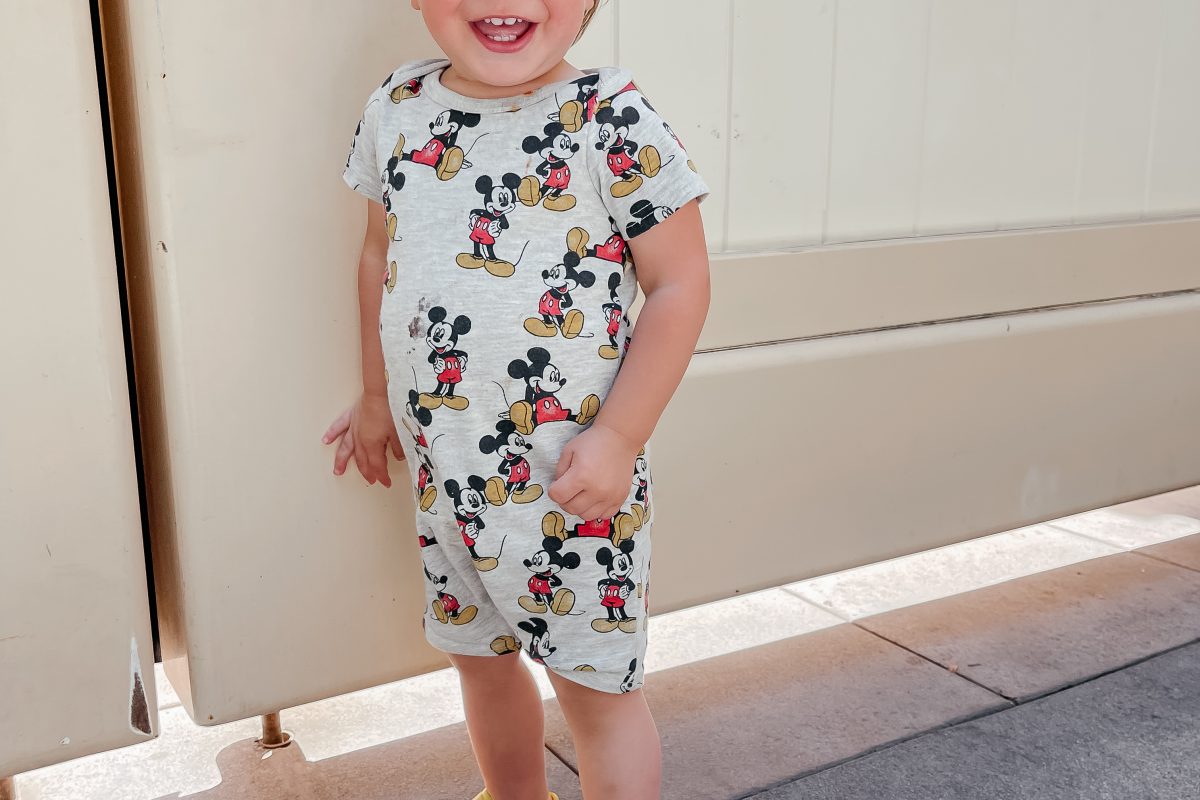